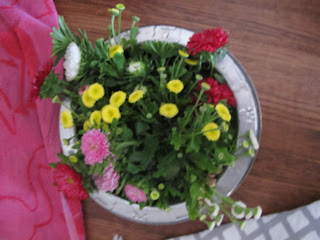 Yesterday would have been to soon to let her go and tomorrow too late. She was done, her beautiful body broken beyond repair, its parts all worn out. I was not ready to let her go. In between wracking sobs, I kept telling her things I wanted her to have in her mind on her last day. Things I remembered about us -- when we lived together in our cabin in the woods and how we went to the beach every day. She was always the fastest dog on the beach.

Lucy was so well loved. Many vistors come to say goodbye. My beautiful neighbor Kaumudi did an impromptu puja ceremony to pass her to the next place, and to welcome fortune and goodness in her wake. The candles are still burning tonight for our sweet girl.

The mobile vet arrived in green scrubs. He was sweet and took his time and gave us room to nuzzle her fur and tell her our final words. I told Lucy that where she's going is one huge beach, with lots of stairways up to people's yards, and nobody cares if dogs come over. At this place, the squirrels are very slow and sometimes fall out of trees. There is as much ice cream as you want and you never have to fetch anything or take a bath. It's also home to her dog friends Fred and Chloe and Bilbo and Paolo, and my Dad, who could probably use a dog up there.

One injection relaxed her, the pain drifting out of her body. Another slowed her breathing. And she just stopped.

I would bet good money that she's the fastest dog on the beach again.

My girl is shutting down. She ate a little ice cream today, and drank hardly any water. We went outside about 10 times, walking slowly, doing nothing. Two girls, just walking together. Going anywhere. Nowhere.

People are coming to say goodbye to her. She made a lot of friends, this dog. People tell me their stories and they tell me I'm doing the right thing and to be strong. I will be that person on the other side someday, offering my condolences to a raw, aching person like myself right now.

The vet will come tomorrow afternoon. I have learned the code for this type of visit is a "house call." He will administer a shot that will put her in the "twilight." Then a megadose of anesthesia. And she will drift out.

Cinco, her little Chihuahua brother, has become protector. He licks her constantly to make her better. He stands guard and won't let people get too close. In solidarity, he won't eat any food either. He won't leave her side. I take comfort in this. We are a pack.

I spend time curled up in a nest of pillows with her, breathing in the last of her doggie smell. Probably smells like gross old sick dog to everyone else. I reminded her today about the time she ate a whole Easter basket and pooped out pastel foil wrappers for two days after. About the time we flew on a seaplane to the Gulf Islands and I had told the pilot beforehand that she was a lap dog -- I didn't mention she'd take three people's laps though. About the times she'd been attacked by other dogs, and I jumped in to tear those bastards off her. That I would give any piece of blood or bone or flesh from myself to make her better. 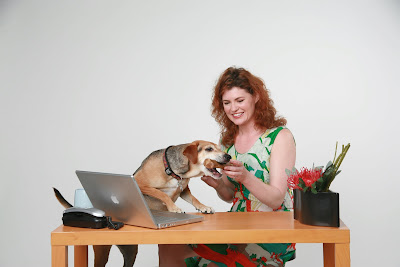 I have three years' worth of favorite memories with my husband, and seven months' with my kid. For Lucy, I have 14 years of experience. It's not full of adventure and mishap. It's two friends who lived together and loved each other and went a lot of places. To me, my time with Lu is a novel, a movie, a Bible. She has taught me so many lessons. The most important: Assume everyone you meet will be your best friend, and chances are, they will.

Other times that shine in my Lucy mind:


Lucy is not doing well. She paces around until I let her out, then she strains to pee and poo, then meanders through the bushes in our courtyard until I come to get her. She lies on her bed and sleeps. I lie down next to her and we spoon and she shivers and I cry into her fur and feel her silky ears and try to imagine the moment when she is no longer warm and with us.

I do not know how to say goodbye.

Relationships: Lucy the Dog Part I 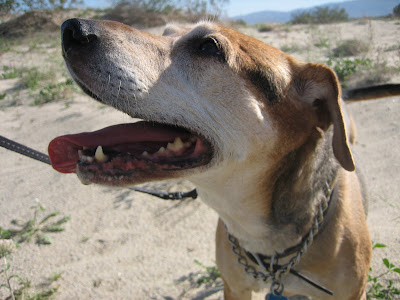 The first time I saw Lucy was in the spring of 1998. She was on a sliver of shoulder on a twisty road. One wrong step would have sent her down a sheer cliff to the frigid waters of Discovery Bay on Washington's Olympic Peninsula.

I slowed down to get a better look at this sleek, quick mutt, a cross between a beagle and a hound. Pretty. Redheaded. But there was no place to pull over for about a mile and when I finally did, I couldn't find any trace of her.

I'd had it in my mind I needed a dog, being an Annie Oakley type all alone in my cabin off the grid in the woods. I wanted a dog who would bark at strangers, retrieve endless tennis balls thrown on the beach, and warm the bed when the small cast-iron stove burned up all its wood.

A month later I went to the pound and lo, there was that same dog from the road. She'd been picked up a couple miles from where I'd seen her. They gave her a name -- Popcorn. For a really good reason. She was super spazzy and just wouldn't be still, jumping around the pen, trying to lift off and take flight when she was on a leash.

Nobody wanted her, she was cute but just too hyper. The pound folks kept her alive much longer than they were supposed to, hoping that someone in need of an uncouth, unschooled 9-month-old puppy with the deepest brown eyes you'd ever seen would need her. They'd waited for me.

I brought her home to my little cabin in the woods, and introduced her to the other residents, cats called Puck and Ajax. The first night we settled down by the fire with Cabernet and rawhide, and she happily drifted to sleep. In the morning I came down from my loft bed and woke her up. She jumped with a slight start, furiously wagged her tail, broke out into a huge doggie smile, and peed a little with excitement. It was, truly, the first day of the rest of our lives together. 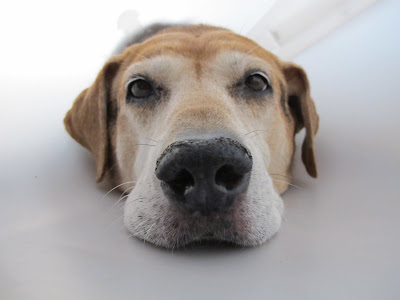 I rastled with her wilddog stubborn mind, and we finally came to a compromise on obedience training. That anything she did at my command had to appear as if it were her own idea. She'd hear "come" or "sit" or whatever, look up into the air as if she were contemplating her next move, and then act in her own time. Eventually.

She never fetched one thing her whole life and greeted all strangers (even a burglar) as if she were running for mayor and could she please have their vote. She has always been the best spooner I know, however.

These past couple weeks Lucy's had it rough. She has a tumor growing in her abdomen. It makes it hard for her to pee at her own will, which is humiliating to this dog who had been known to hold it for up to 10 hours on a sailing trip through the San Juan Islands. She has gloppy masses on her body that break open and ooze. Tonight she was on the leash and fell over on her side as her hind legs seized up.

I called the vet and asked what we should be doing, and she suggested a prescription for an anti-inflammatory that might help her swelling and curb the pain.

"One month's worth?" she asked.

Buy Great 40licious Gifts for Yourself (or, OK, your friends)